Why Cristiano Ronaldo Jr has just a 0.13% chance of playing professional football

A new study by OLBG, Athletic Genetics, has studied the role of genetics in professional sport to determine whether being born into a sporting family to a professional player gives offspring a competitive advantage.

The analysis looks at 10 selected sports and the profile of professional players to see how many family connections can be found. It found that Cristiano Ronaldo Jr and David Lucca, son of Brazil star Neymar, have just a 0.13% of making it as professional footballers.

Although this margin is small, it proves that the children of pros have a 0.07% better chance of succeeding in their chosen sport than the average person, who has just a 0.05% chance of playing professionally.

Out of 270,000,000 people playing football at any level around the world according to FIFA’s most recent global survey, there are just 138,308 registered professional players – 178 of which have another family member in the sport.

This means that if you already have a family member to have played professionally or currently still doing so, you have a statistically much better chance of making it at the top level thanks to the genetics passed on to you, or the environment you’ve grown up in.

The genes passed on by their famous parents make it statistically more probable that David Lucca and Cristiano Ronaldo Jr succeed with the football careers – but it’s not just genetics that plays a part. 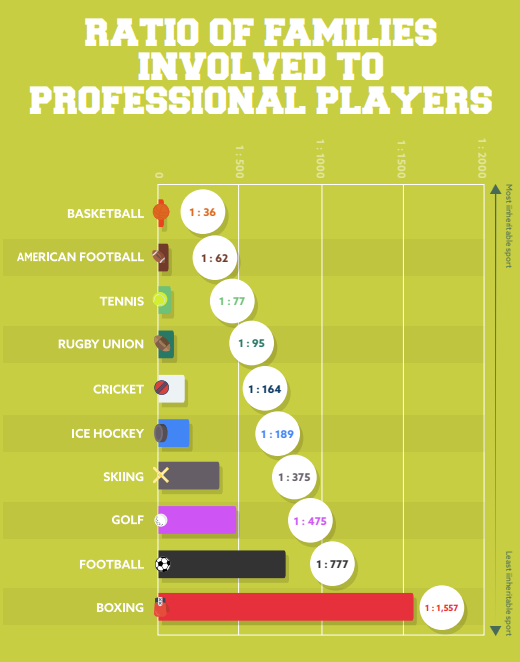 Professor Kevin Till, an expert in athletic development from the Carnegie School of Sport at Leeds Beckett University, said: “If you are born into a family who plays football (such as Cristiano Ronaldo Jr and David Lucca) then you are more likely to watch that sport, play that sport and receive better development opportunities in that sport.

“These players will likely have been nurtured by parents who are also some of the best coaches in the game, so have probably had better opportunities to exploit that than most.

“Hereditary aspects do have an influence, but don’t make for a good sportsperson alone. Ultimately, the hereditary aspect may influence some sports more than others (like height in basketball) but you still need to be trained and developed to succeed.”

England has produced the most sporting families according to Athletics Genetics’ research, with 89 and 131 in the UK overall, but it is the USA that leads the way with 223 different families to have played any kind of professional sport. The Philippines on the other hand, has 0 families to have done so.

For access to the full infographic and results, please visit: https://www.olbg.com/insights/athletic-genetics