KEIR RADNEDGE REPORTS: Five former senior officials of the Russian athletics federation – including an ex-president , board member and executive director – have been banned from the sport for four years by World Athletics for anti-doping offences.

A disciplinary tribunal has upheld all charges laid the Athletics Integrity Unit against ex-RusAF supremo Dmitry Shlyakhtin and former board member Artur Karamyan.

AIU chair David Howan said: “These are important decisions for the sport of athletics. The AIU was created to be a fearless and independent organisation. Our work in uncovering the conspiracy and fraudulent behaviour in this case demonstrates that the AIU is fulfilling its role to make cheats accountable, irrespective of their stature or standing.

“Traditional approaches to uncovering cheating have often proven to be inadequate and that’s why the AIU made the strategic choice of investing heavily in our investigations and intelligence capability. The benefit of this approach is evident from decisions like these.”

This was related to the submission of forged documents and false explanations to the AIU and their conduct during a 15-month AIU investigation into a ‘whereabouts’ case against Russian high jumper, Danil Lysenko. The athlete and his coach Evgeniy Zagorulko were also charged.

The Disciplinary Tribunal has found Shlyakhtin and Karamyan guilty of tampering, complicity, failing to report an Anti-Doping Rule violation, and failing to co-operate with the AIU investigation, (in this context Karamyan was found to have destroyed documents).

Both Shlyakhtin and Karamyan have been banned for four years, the maximum possible sanction for these charges under the Anti-Doping Rules. The Disciplinary Tribunal decision can be found here.

Parkin, Orlova, and Ikonnikova did not contest the AIU charges against them for tampering, complicity, failing to report an Anti-Doping Rule violation, and failing to co-operate with the AIU investigation and have also been banned for four years. Those decisions can be found here.

The sanctions against Orlova and Ikkonikova will be served concurrently with sanctions of six and eight years respectively which were previously announced for cases of failure to comply with an investigation Demand by the AIU, as well an order of the Chair of the Disciplinary Tribunal that they comply with the Demand. The cases against Lysenko and his coach Zagorulko are still in process.

The charge against the Federation was referred to the World Athletics Council in January 2020. RusAF admitted the charges and was dealt with by the Council. The details can be read here.

During the final phase of investigation, between April and November 2019, the AIU conducted 22 key witness interviews; acquired 14 electronic storage devices including mobile phones and computer hard drives, conducted digital forensic analysis of over six terabytes of electronic data and translated approximately 7000 documents or records from Russian to English.

SUMMARY OF CHARGES AND DECISIONS 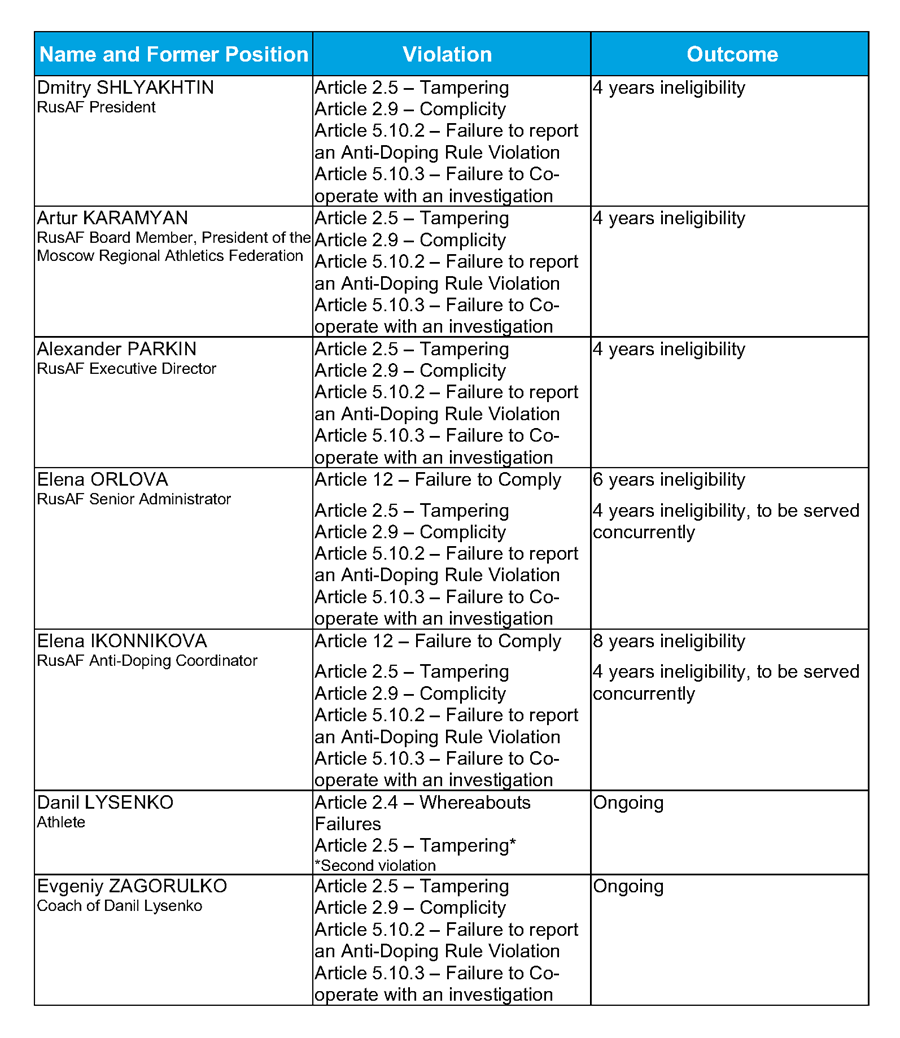